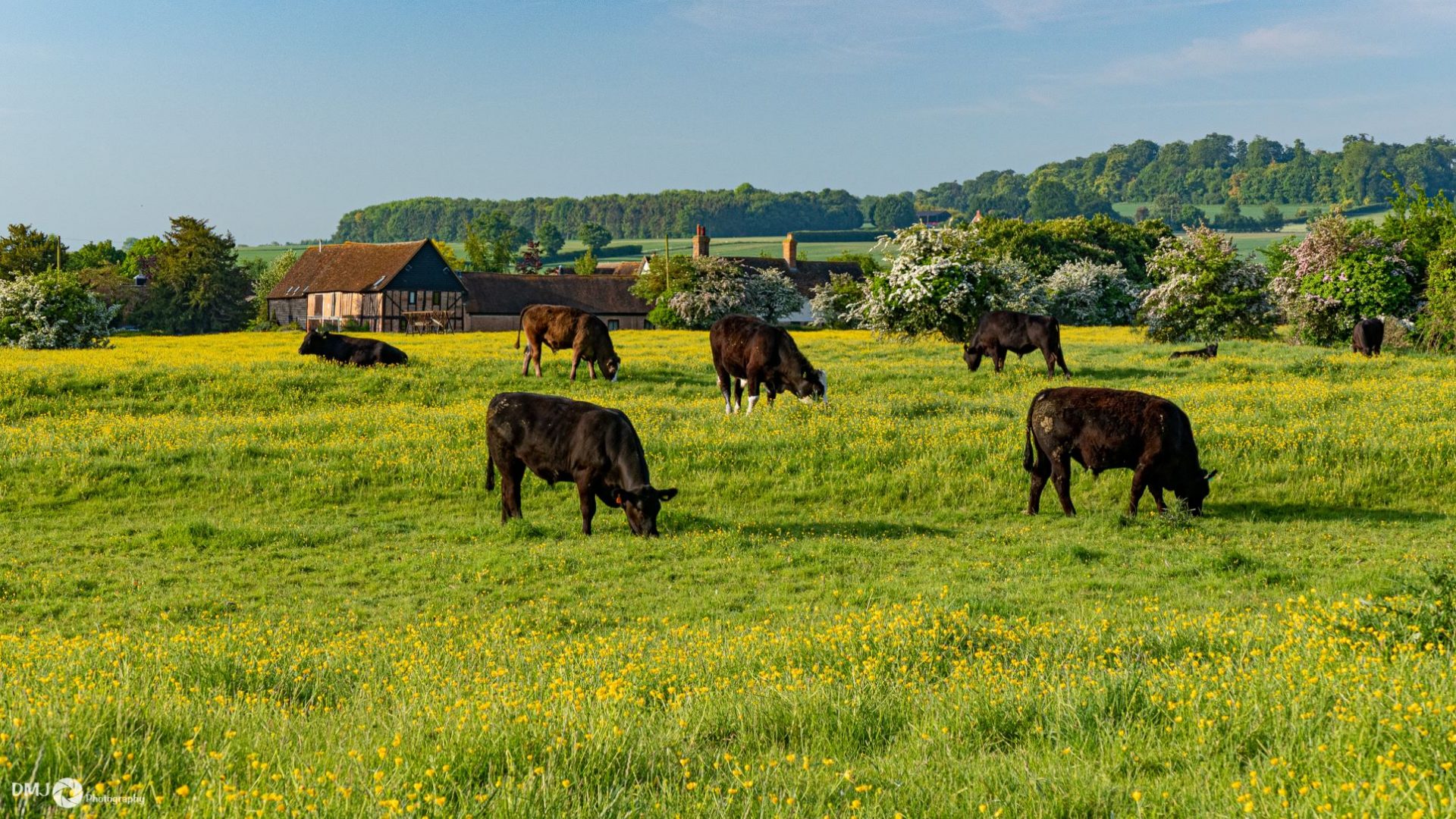 This scheduled ancient monument was bought in 1993 by the Parish Council and is managed by a charity called the Pirton Bury Trust.

A brief history of the monument

The motte is the large earth mound which dominates the field called Great Bury. The mound is known as Toot Hill from the old English meaning look out hill. This mound was originally surrounded by deep water filled ditch or moat, which is still partly visible. A timber tower would have stood on top of the mound. 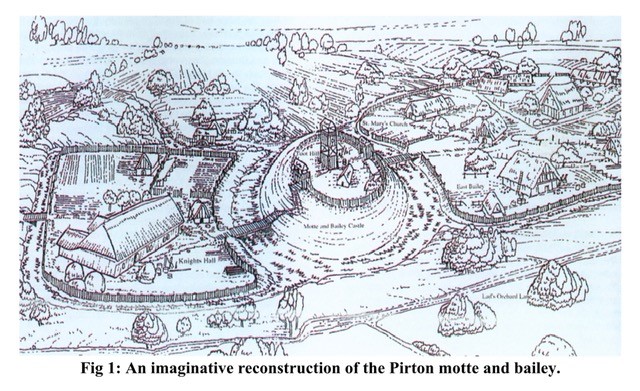 The Bailey is the ditched, enclosed area to the east of the motte. It was originally surrounded by a defensive timber palisade on an earth bank formed by the upcast from the ditch. This bank and ditch also enclosed Mary’s church and churchyard. There is evidence that a second Bailey once existed to the west of the motte, extending towards Bury End, but this is now largely destroyed.

Together the mound and bailey are all that remains of an earth and timber castle, probably constructed during the wars between King Stephen and Queen Matilda (1139-1153). This was a period of great social and political unrest known as the Anarchy. The castle was probably erected by a member of the De Limesey family, who held the Manor of Pirton from the conquest. It controlled the route through the Chilterns and was braided route of the Ickneild Way. 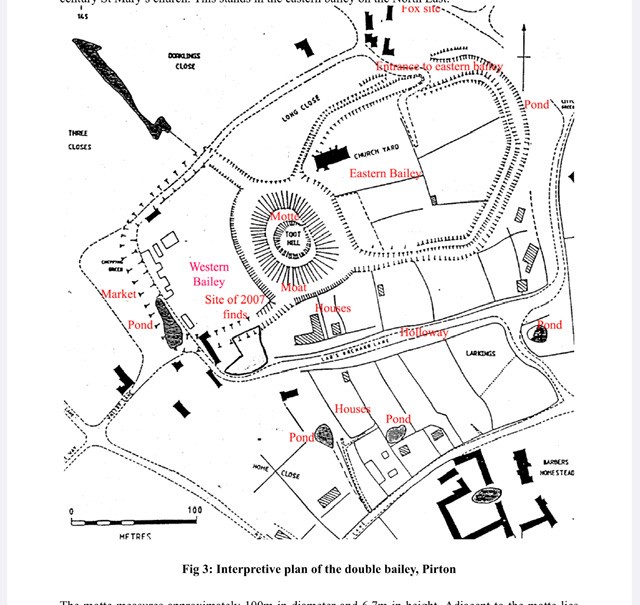 The long straight ditch like feature to the South of the motte and bailey earthworks, linking Walnut Tree Rd with Bury End, is in fact the line of a mediaeval road or Holloway. This road was still in use in the 19th century when it was known as Lads Orchard Lane.

Between this sunken road and Walnut Tree Rd are extensive earthworks indicating the former presence of houses, outbuildings, and property boundaries. These earthworks together with the evidence of old maps, show that this part of the village has been abandoned in recent centuries. The village earthworks continue to the south of Walnut Tree Farm.

These earthworks are very regular in plan, and they respect the castle earthworks. It is probable that the castle and this part of the village were planned and constructed the same time in the 12th century.

There are two permanent ponds on the Bury, the one near Walnut Tree Road is called Larkins Pond and the other is Blindmans Pond. 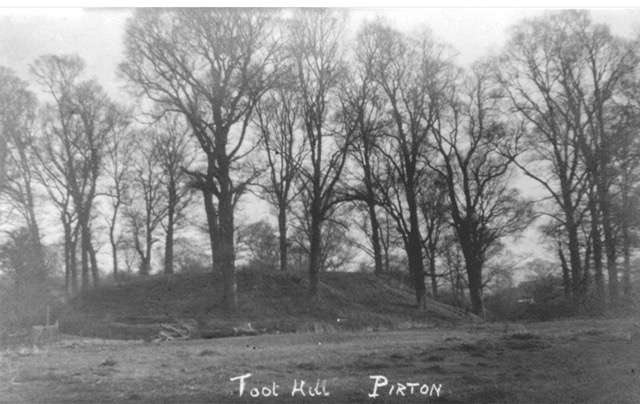 1726 The Manor of Pirton was sold by the Docwra family of Putteridge to Ralph Radcliffe of Hitchin Priory. This included Highdown, Walnut Tree and Highdown farms, and many other cottages and land in the village. The Bury and Toot Hill were included in this transaction and passed down through the Radcliffe family to the 20th century, when all the land was owned by the Priory Estates.  Area D was given to the Church Commissioners by the Lord of the Manor for a future extension to the churchyard and it was used as allotments. 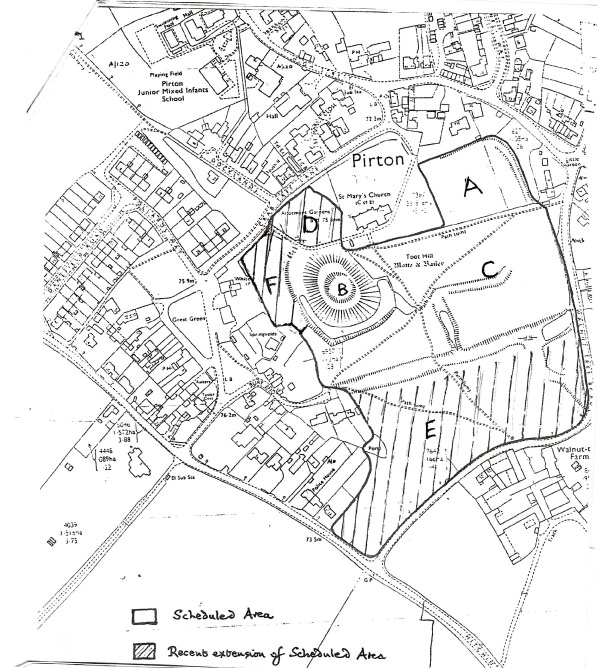 1977The Priory Estates sold the Bury and Toot Hill to the Parish Brothers who were landowners from Higham Gobion. (areas B&C) The field was grazed by Charolais cattle belonging to the Walkers of Elmtree Farm. Also, part of the Bury nearest to the village pond was sold to the owners of 28 High St and next door, who incorporated it into their gardens (area A).

1979 Areas A, B &C were amended under the Ancient Monuments and Archaeological Areas Act .

1983 The Church Commissioners applied to build three houses which included a new vicarage on area D. The Parish Council objected and only the vicarage was built.

1986 North Hertfordshire District Council undertook an archaeological survey of the Bury and Toot Hill and identified a shrunken mediaeval village on area E.

1987 Derek Cook stopped growing beans on the allotment and a nature area was created on area D.

1989 A planning application was submitted for four houses behind the White Horse public house (area F). This was refused owing to proximity of the scheduled ancient monument.

1991 Areas D,E and F were scheduled by English Heritage and the Parish Council began the process of buying Toot Hill and the whole Bury  from the Parish family.

1993 The Parish Council completed the sale with a grant from English Heritage of £8,000 and a loan from the public-works loan board for £20,000 to be repaid over 25 years.

1994 The Pirton Bury Trust was registered as a charity. There were four trustees who were all Parish Councillors: Dick Woodward, Eric Franklin, Jack Baines and Helen Hofton. Two of the trustees, Jack Baines and Helen Hofton were made life trustees in recognition of their contribution to the Bury. A Management Committee, which included the four trustees, and two Parish Councillors and two co-opted members was also set up. A management agreement was formalised, between English Heritage and the four trustees, to maintain the scheduled site. £1000 a year was granted by English Heritage for this purpose. Advice was also obtained from the Countryside Management Service on managing the flora and fauna of the site. Mr Cooper of Stockbridge Farm Henlow, was granted a licence to graze the Bury for £500 annually. Trustees met annually and the Management Committee four times a year as appropriate.

1994 The trustees wrote to the Church Commissioners asking if the Parish Council could buy the nature area (area D). This was supported by the vicar of St Marys Rev John Pottifer but this was later refused by the Commissioners.

!995 An interpretation board was erected with artwork by local artist Mike James and information from Gil Burleigh. The oak frame was made by Keith Parkins. Discussions took place with NHDC regarding the removal of spoil dumped in the moat in the 1950s.

1996 A new footpath was dedicated by Hertfordshire County Council but permission was refused for a path between Toot Hill and area F. 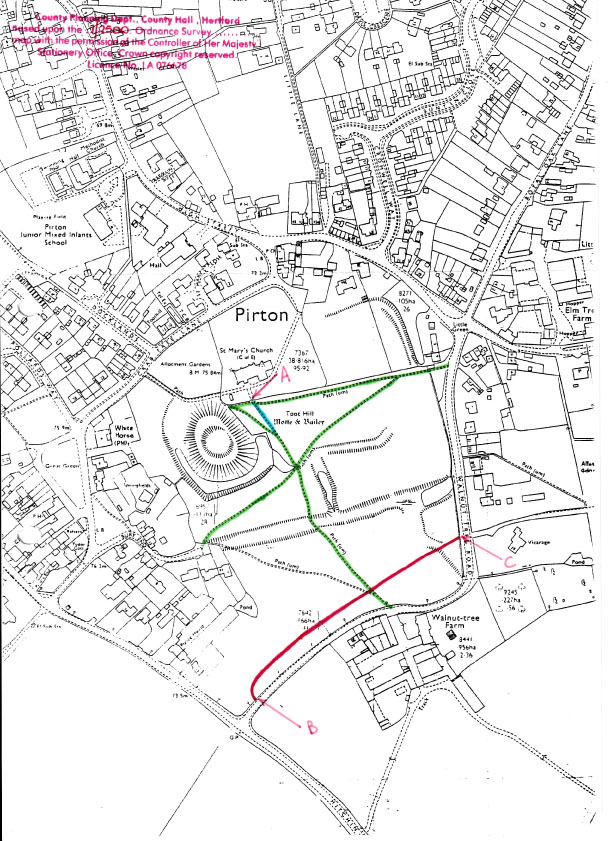 1998 The Parish Council were concerned about further planning applications for the land behind the White Horse /Motte and Bailey public house. They offered to buy the land , which was used as a builders yard from the owner Len Roberts. He asked for £15,000 but the District Valuer suggested a figure of £3000. Because of the disparity, the sale did not progress.

2009 The Management Committee was disbanded, and the trustees took over the management of the site.

2015 The annual grant from English Heritage finished. The only income  for maintaining the site was £500 annually from grazing.

Disclaimer: Though due care has been taken to accurately add entries into the website  no liability is implied or accepted by Admin for any errors or omissions. This website is intended only as a guide, the user should check relevant village groups.

The Pumpkin Club is an integral part of Pirton life, raising  money through events to support village causes and projects

This website uses cookies to improve your experience while you navigate through the website. Out of these, the cookies that are categorized as necessary are stored on your browser as they are essential for the working of basic functionalities of the website. We also use third-party cookies that help us analyze and understand how you use this website. These cookies will be stored in your browser only with your consent. You also have the option to opt-out of these cookies. But opting out of some of these cookies may affect your browsing experience.
Necessary Always Enabled
Necessary cookies are absolutely essential for the website to function properly. These cookies ensure basic functionalities and security features of the website, anonymously.
Functional
Functional cookies help to perform certain functionalities like sharing the content of the website on social media platforms, collect feedbacks, and other third-party features.
Performance
Performance cookies are used to understand and analyze the key performance indexes of the website which helps in delivering a better user experience for the visitors.
Analytics
Analytical cookies are used to understand how visitors interact with the website. These cookies help provide information on metrics the number of visitors, bounce rate, traffic source, etc.
Advertisement
Advertisement cookies are used to provide visitors with relevant ads and marketing campaigns. These cookies track visitors across websites and collect information to provide customized ads.
Others
Other uncategorized cookies are those that are being analyzed and have not been classified into a category as yet.
SAVE & ACCEPT